Affordable airport and seaport taxi transfers to and from Leeds in West Yorkshire to Gatwick, Heathrow London City Airport, Luton, Stansted, Manchester and further afield to Scotland and Newcastle, with 4G Wifi.  Cars Exec provide chauffeur driven cars, at competitive taxi rates but in  the comfort of our in our executive corporate and VIP chauffeur driven cars. Our prompt, reliable 24 hour airport taxi service to and from anywhere in the UK, as well as the London airports is available in our Mercedes S-Class, Mercedes E-Class or Mercedes Viano for larger groups.

Leeds airport transfer to & from Heathrow Airport from £352

Leeds airport transfer to & from Gatwick Airport from £384

Leeds airport transfer to & from London City Airport from £384

Leeds airport transfer to & from Newcastle Airport from £416

Leeds airport transfer to & from Luton Airport from £353

Leeds airport transfer to & from Stansted Airport from £372

Leeds airport transfer to & from Birmingham Airport from £317

Leeds airport transfer to & from London City Airport from £384

We provide executive airport transfers to and from Leeds to all UK airports including:

UK Cruise Ship Transfers to and from Leeds

Looking for a taxi transfer to a Cruise Ship Terminal from Leeds? Why not start your cruise in style, we offer cost effective travel from Leeds to the following ports:

We provide a trusted, professional but discreet service to our business and corporate clients in Leeds, with impeccable chauffeur driven cars as well as luxury people carriers to Leeds based UK Companies, international business and discerning private clients, travelling to and from London.

Find out more about Leeds

Leeds is a large city based within the county of West Yorkshire. With its ten towns including Farsely, Garforth, Morley and others, Leeds has a population of around 750,000 as last recorded according to the 2011 census. Leeds’ high population sees it as the second most populous city within England, with only Birmingham achieving greater numbers.

Leeds is now divided into 31 civil parishes along with a single unparished area. The Borough of Leeds was founded in 1207 and it was later granted city status in 1893. To the North and East, Leeds is bordered by North Yorkshire, which includes the Harrogate and Selby districts. Other neighboring cities come from West Yorkshire including: Wakefield in South and Bradford in the West. The centre of Leeds is connected to the National Rail Network at Leeds Railway Station, whilst transport in West Yorkshire is connected via the West Yorkshire Passenger Transport Executive.

Leeds also benefits from a diverse and thriving economy with a heavy shift towards the service sector as opposed to the more traditional manufacturing industries. Outside of London, Leeds is also home to one of the largest financial centres in England.

The History of Leeds

Leeds (derived from the Celtic area Leodis) was voted UK’s favourite city in Condé Nast’s Readers’ Traveller Awards 2003. It was a market town that became an industrial powerhouse and grew and developed into a service-based city economy with an attractive, smart centre.

The industrial revolution brought about massive change as it became a huge manufacturing centre of wool and textiles and a major trading centre (with over half the country’s export passing through for a period). Leeds became known as the city of a thousand trades and by the middle of the nineteenth century the population had passed 200,000. Bolstered by the 1816 Leeds-Liverpool Canal and the Leeds-Selby railway in 1835 (The Middleton Railway was the world’s first commercial railway, 1758 Railway Act, from The Middleton colliery to coal-staithes (sidings) at Meadow Lane just south of Leeds Bridge), the city continued to grow and prosper rapidly, with grandiose architectural manifestations of the Victorian city’s wealth built in abundance, and expanding affluent suburbs to the north. Leeds University was created around the 1880s, bringing an intellectual dimension, and Leeds was served by one of the world’s most extensive tram systems (sadly later replaced by buses). A garden in Roundhay, Leeds was the location of the world’s first moving images, filmed in 1888 by Frenchman Louis le Prince (who later disappeared in mysterious circumstances). Leeds was granted city status in 1893.

Today, Leeds is still one of the most cosmopolitan, fast-growing, innovative and prosperous cities in the UK with developments springing up by the week and new bars, boutiques, clubs and restaurants seemingly more often, the two universities adding to the vibrancy, and international eateries and shops.

Although not considered a ‘traditional’ tourist destination, Leeds has plenty to occupy the visitor. As well as the main sights, museums, galleries, parks etc., wandering around the buzzing city centre to take in the atmosphere and admire the fantastic blend of architectural styles from the past few hundred years is a pleasure in itself. Within the city centre, the main districts are the civic quarter, central shopping district, exchange quarter and financial district.

The very centre of Leeds is a temple to consumerism. Bounded by the ‘Public Transport Box’, a rough half mile square between The Headrow, Vicar Lane, Boar Lane and Park Row gives Leeds one of the most compact, busy and diverse pedestrian shopping districts in the UK where the highest concentration of the city centre’s stores are to be found.

The principal shopping street is the broad and bustling Briggate, where many flagship stores such as Harvey Nichols, House of Fraser, Debenhams are to be found alongside high-end fashion (e.g. Louis Vuitton) and high street favourites (Topshop, Zara, H&M). Briggate’s attractive and eclectic architecture spans three centuries, and the grand shop fronts only add to the streets appeal.

Either side of the top end of Briggate are the city’s famous arcades, splendidly palatial Victorian roofed-over shopping streets home to some of the city’s most exclusive and interesting shops. The famous Victoria Quarter (Victoria St, County Arcade and Cross Arcade) has some of the most expensive clothes in Leeds. Queen’s and Thornton’s arcades are a little more affordable with more independent stores. Down from the arcades, several medieval yards (or “loins”) run off almost hidden from between shopfronts on Briggate. Whilst some are little more than shop-backs and some are now closed off, some exude genuine historic atmosphere and a few are home to attractive pubs and bars, including The Angel Inn, The Ship, The Bay Horse, Queen’s Court and 300-year-old Whitelocks’.

Beyond Briggate, there are several other prominent shopping streets, including gorgeously symmetrical King Edward Street with its matching Victorian Burmantoft terracotta buildings. Commercial Street, Kirkgate, Lands Lane and Albion St are other principal streets in the area, continuing the mix of shops, cafés, lovely architecture. There are also several indoor shopping centres, and a central focal point is tiny but busy Central Square at the base of Lands Lane. Albion Place is a quieter street of elegant Georgian buildings (mainly offices) including the exclusive Leeds Club and the city’s central private members library, running between the square and Albion St. Swan Street is a quiet and pretty little street between Briggate and Lands Lane with a few attractive little shops, cafés and bars and a laid-back vibe, as well as the internationally famous City Varieties theatre and music-hall, once home to Charlie Chaplin. 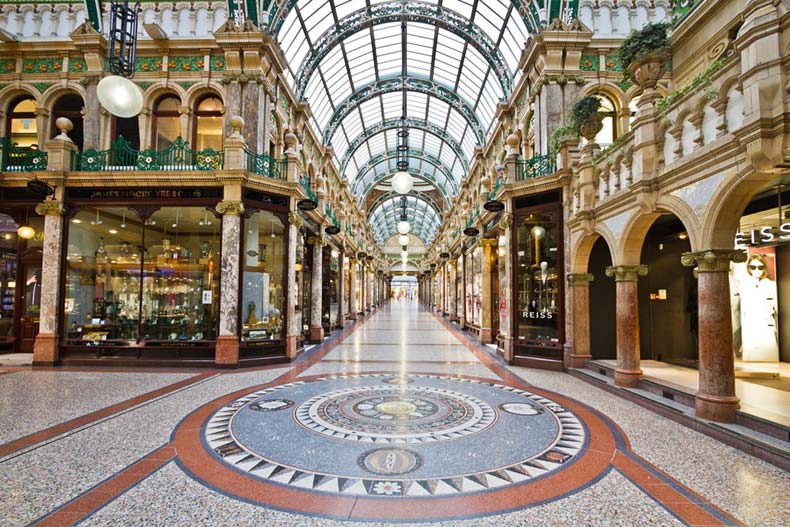