Airport Transfers to and from Norfolk

We supply airport taxi transfers to and from Norfolk in chauffeur-driven cars across the county to all UK airports and UK ports including: Heathrow, Gatwick, London City Airport, Luton and Stansted,  Bristol Airport,  as well as Southampton Airport, Dover,  Tilbury Docks and Portsmouth. Get an instant quote and book online, it couldn’t be easier, no hidden additional costs. Cars Exec run Norfolk airport transfers from the County Town of Norwich and the towns of Great Yarmouth, Kings Lynn, Thetford, and the surrounding countryside.

Our airport transfer rates are competitive with other Norfolk airport transfer shuttles, but in a choice of luxury cars and people carriers. Comfortable, clean and exclusive, we are a prompt, reliable, 24 hour airport taxi service. Choose from our Mercedes S-Class, Mercedes E-Class or Mercedes Viano for larger groups and get your holiday off to a stylish start.

We provide executive airport transfers to and from Norfolk to the following airports:

Our executive airport transfer service to and from Norfolk includes:

Personal and Corporate Chauffeur Services in and around Norfolk

We provide a professional service to business clients and VIPs visiting Norfolk and travelling to and from London. Using an executive car taxi service, we will ensure you or your guests get a professional, discreet and a courteous service every time.

Looking for a taxi transfer to and from a Cruise Ship Terminal in Norfolk? Why not start your cruise in style, we offer cost effective travel from Norfolk to the following ports:

Find out more about the county of Norfolk

​Norfolk is a large county in East Anglia, forming the round eastern rump of the land. The county is generally flat and intensely cultivated. The north-western corner of Norfolk is on the Wash, where once was marshland running many miles inland, now drained, and the edge of the Great Fen. In the south-eastern part of Norfolk is another area of low ground; the Norfolk Broads.

The Broads, strictly so called, are the wide lakes linked by rivers, though the name is applied to the whole area. The main rivers of the Broads and of Norfolk as a whole, are the Waveney, which marks the boundary with Suffolk, the Yare, which runs from Norwich, and the Bure. The whole area is barely feet above sea level, or lower. These rivers, together with the Broads themselves and many smaller rivers and creeks, make up a network throughout western Norfolk, providing about 200 miles of inland waterways. The Broads are popular for boating holidays.

Visitors to Norfolk are charmed by cornfields patterned with cornflowers and poppies, and windmills. There is higher ground in Norfolk too, in particular in the north of the county, from the cliffs overlooking the sea at Hunstanton, to Cromer – Norfolk’s highest point is in these hills.

The Breckland district is a contrast, a country of open heathland and bracken, now much afforested. The coast of Norfolk sweeps round in a great arc. At its southern end, eastward facing, is Great Yarmouth, a fishing town still but more a seaside resort. Cromer further north is another resort. On the north coast before the Wash, at Cley-nest-the Sea and Blakeney low tide reveals muddy marshes with long creeks reaching far out. Norwich, the county town is an ancient Cathedral City. Norwich can no longer boast of being England’s second town, but it is the biggest in East Anglia.

Norwich is famous for the number of its ancient parish churches. Amongst them the greatest church is the Cathedral, with one of the highest spires and one of the longest naves in the land, not overblown but all in perfect architectural harmony. 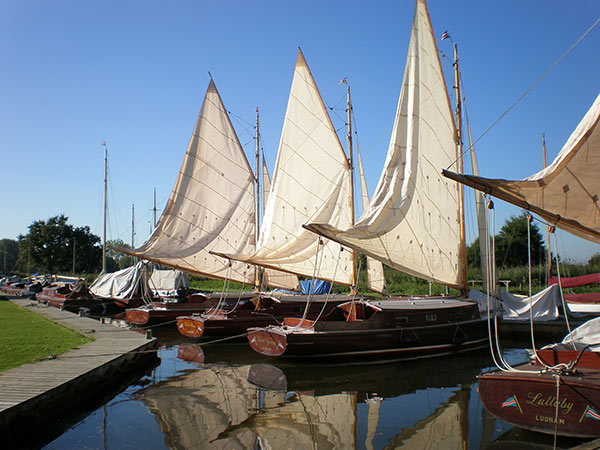 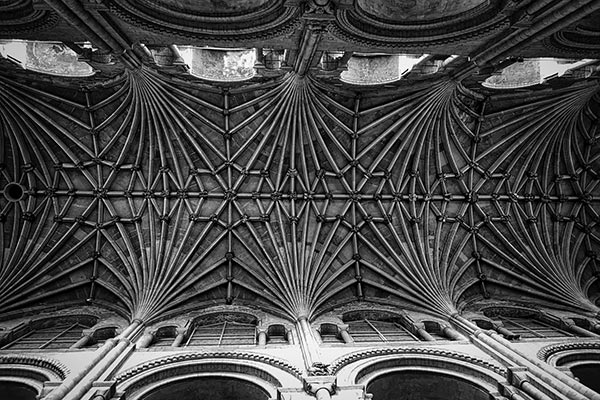