Affordable airport and seaport taxi transfers to and from Brighton and Hove in East Sussex to Gatwick, Heathrow London City Airport, Luton, Stansted and further afield to East Midlands, Leeds, Manchester and Newcastle, with 4G Wifi.

Brighton and Hove airport transfer to & from Heathrow Airport from £333

Brighton and Hove airport transfer to & from Gatwick Airport from £324

Brighton and Hove airport transfer to & from Liverpool from £509

Brighton and Hove airport transfer to & from Edinburgh Airport from £763

Brighton and Hove airport transfer to & from York from £536

Brighton and Hove airport transfer to & from Hull from £542

Brighton and Hove airport transfer to & from Bangor from £573

We provide executive airport transfers to and from Brighton and Hove to all UK airports including:

Our executive airport transfer service from Brighton and Hove includes:

UK Cruise Ship Transfers to and from Brighton and Hove

Business and Corporate Chauffeur Services in Brighton and Hove

Find out more about Brighton and Hove

The towns of Brighton and Hove formed a unitary authority in 1997 and in 2001 were granted city status by Queen Elizabeth II. “Brighton” is often referred to synonymously with the official “Brighton and Hove” although many locals still consider the two to be separate towns.

You need never get bored in this lovably eccentric city. There’s always something unexpected to enjoy – be it a sea-facing yoga class, watching a skateboarding Jack Russell, or browsing through a surprisingly good beachfront hippy market. The secret is to roam freely and keep your eyes peeled.

Brighton has acquired a certain London sophistication in recent years, but sheeny glamour never wins out here. Head to the boho North Laine district, and you find offbeat designers and dingy flea markets happily melding with sleek restaurants and bars. Throw in gentrified Regency squares, oddball museums, and a clutch of well-upholstered parks with traditional cafés attached – and you have a city that truly caters for all tastes.

The History of Brighton

During the reign of Henry VIII, Brighton was burned to the ground by French raiders. The event led to the creation of the first map of Brighton. The original map is held at the British Library, but we have 19th-century copies of the map which show how the town was laid out in the early 1500s.

Winchester is well known for the Great Hall of its castle, which was built in the 12th century. The Great Hall was rebuilt sometime between 1222 and 1235 and still exists in this form. It is famous for King Arthur‘s Round Table, which has hung in the hall from at least 1463. The table actually dates from the 13th century, and as such is not contemporary to Arthur. Despite this, it is still of considerable historical interest and attracts many tourists. The table was originally unpainted but was painted for King Henry VIII in 1522. The names of the legendary Knights of the Round Table are written around the edge of the table surmounted by King Arthur on his throne.

Modern Brighton began to emerge in the 1750s. Building on the fashion for seawater cures, Brighton quickly became the largest and most successful seaside resort in the UK.

Dr Richard Russell, c1755
You can download portraits from our Fine Art collection of many of the important people who shaped the town at this time, including:

The Victorian period was a time of great technological change, and our Innovation & Invention resources capture new developments in the town and the work of local inventors such as Magnus Volk.

No invention had a bigger impact on Brighton than the expansion of the railway network. The opening of the railway line to London in 1841 completely changed the character of the town. Where Brighton had once been a fairly exclusive resort for wealthy and fashionable visitors, it now became a popular destination for huge numbers of day-trippers.

Brighton continued to grow rapidly during the twentieth century. Rottingdean and Preston were absorbed into the town in 1928, and in 1997 the town was combined with Hove and Portslade.

It was a time of great social and economic change, much of which was driven by the two world wars. Our First World War resources show the effect of the war on the town. But the Second World War had a more immediate impact when Brighton was on the frontline of a possible invasion and was heavily bombed. 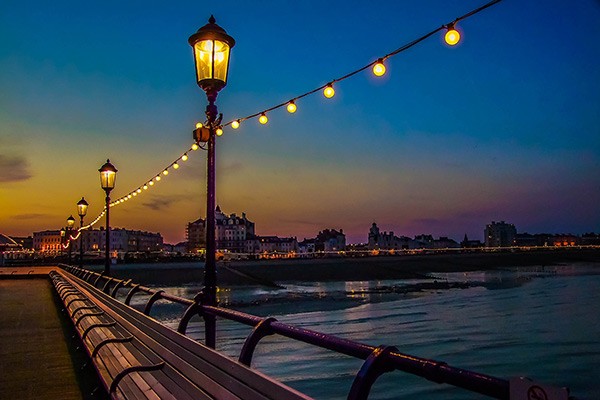