We offer affordable executive airport and seaport taxis to and from Chelmsford in Essex to all UK major Airports with 4G Wifi.

Cars Exec provide chauffeur driven cars, at competitive taxi rates but in the comfort of our gleaming, comfortable and exclusive chauffeur driven airport cars. Our prompt, reliable 24-hour airport taxi service to and from anywhere in the UK, including Heathrow Airport, Gatwick Airport, Birmingham Airport, Bristol Airport, London City Airport, Exeter and even as far as Glasgow Airport, is available in a choice of:

Chelmsford airport transfer to & from Heathrow Airport from £341

Chelmsford airport transfer to & from Gatwick Airport from £351

Chelmsford airport transfer to & from St Ives from £405

Chelmsford airport transfer to & from Bangor from £560

Chelmsford airport transfer to & from Fishguard from £514

Chelmsford airport transfer to Glasgow from £708

Chelmsford airport transfer to & from Durham from £573

Chelmsford airport transfer to & from Edinburgh Airport from £724

We provide executive airport transfers to and from Chelmsford to all UK airports including:

UK Cruise Ship Transfers to and from Chelmsford

Looking for a taxi transfer to a Cruise Ship Terminal from Chelmsford? Why not start your cruise in style, we offer cost-effective travel from Chelmsford to the following ports:

We provide a trusted, professional but discreet service to our business and corporate clients in Chelmsford , with impeccable chauffeur driven cars as well as luxury people carriers to Chelmsford based UK Companies, international business and discerning private clients, travelling to and from London.

Cars Exec offer cars to and from important meetings, a meet and greet service from Kent Airport, Lydd Airport, Rochester Airport and all the main London airports, as well as Canterbury train station, as well as a daily commute service locally, or long distance to London and other UK cities

Find out more about Chelmsford

The main conurbation of Chelmsford incorporates all or part of the former parishes of Broomfield, Great Baddow, Galleywood, Writtle, Moulsham, Widford, and Springfield, including Springfield Barnes, now known as Chelmer Village.
Chelmsford, Massachusetts, Chelmsford, Ontario, and Chelmsford, New Brunswick, are all named after the city.
On 14 March 2012, Lord President of the Privy Council and Deputy Prime Minister Nick Clegg announced that Chelmsford was to be granted city status to mark the Diamond Jubilee of Elizabeth II.

There are a small number of places of interest within Chelmsford, including the 18-arch Victorian railway viaduct that spans the River Can in Central Park. One of three railway viaducts in the city that carry the Great Eastern Main Line. The Viaduct was constructed in 1842 by the Eastern Counties Railway Company and opened for passenger traffic on 29 March 1843.

The Chelmsford Cathedral is located directly behind The Shire Hall. Originally called St Mary’s Church, it became a Cathedral when the Diocese of Chelmsford was created in 1914. It is officially the second smallest in England behind Derby Cathedral
The Shire Hall is situated at the top of High Street. Opened in July 1791 and built by local Architect and Essex County Surveyor John Johnson, it features a Portland Stone façade. One of the oldest and most prominent buildings in Chelmsford, it was built as a courthouse and there has been a court on the site since at least 1199. However, this finally came to an end on 2 April 2012 with the opening of a new Magistrates Court a short distance away in New Street.

Chelmsford Prison is a male prison and Young Offenders Institution, constructed in 1830. The 1979 film special of the TV series Porridge was filmed largely on location at Chelmsford Prison (while it was closed for repairs after a fire).

Hylands House and Park just to the west of the city is a country house and parkland, saved from dereliction and purchased by the local council in 1966 after the death of the last private owner. Much damaged by fire and vandalism by the time of the sale, the house has now been completely restored by Chelmsford City Council. The house dates from 1730, and the park, 574 acres (2.32 km2), was landscaped by Humphry Repton. It is open to the public and used for a wide range of community events, including the annual music V Festival.

Chelmsford Museum is a local history and industrial heritage museum which also incorporates the Essex Regiment Museum. It includes exhibits and interactive displays focusing on Crompton, Marconi, and Hoffmann, as well as illustrating the development of the town and city from prehistory up to modern times. 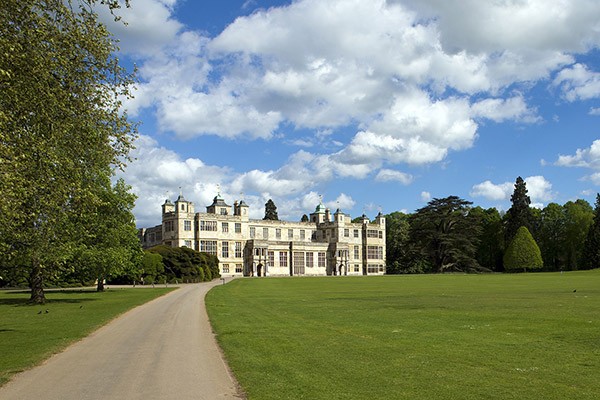