Affordable airport and seaport long distance taxi transfers to and from Bangor in Wales to Gatwick, Heathrow London City Airport, Luton, Stansted as well as to East Midlands, Leeds, Manchester and Newcastle, with 4G Wifi. Cars Exec provide chauffeur driven cars, at competitive taxi rates but in the comfort of our gleaming, comfortable and exclusive chauffeur driven airport cars. Our prompt, reliable 24-hour airport taxi service to and from anywhere in the UK, as well as the London airports, is available in a choice of:

Bangor airport transfer to & from Heathrow Airport from £512

Bangor airport transfer to & from Gatwick Airport from £548

Bangor airport transfer to & from Southampton from £497

Bangor airport transfer to & from Manchester from £464

Bangor airport transfer to & from Canterbury from £594

Bangor airport transfer to & from Stansted Airport from £551

Bangor airport transfer to & from Truro from £483

Bangor airport transfer to & from Newquay from £477

We provide executive airport transfers to and from Bangor to all UK airports including:

UK Cruise Ship Transfers to and from Bangor

Looking for a taxi transfer to a Cruise Ship Terminal from Bangor? Why not start your cruise in style, we offer cost effective travel from Bangor to the following ports:

We provide a trusted, professional but discreet service to our business and corporate clients in Bangor, with impeccable chauffeur driven cars as well as luxury people carriers to Bangor based UK Companies, international business and discerning private clients, travelling to and from London.

Find out more about Bangor

Small but lively city and university town. Bangor Cathedral has ancient roots – this religious site can be traced back to the 6th century. Bangor itself is an old Welsh word for a wattled enclosure, such as the one that originally surrounded the cathedral site. The present cathedral is a somewhat more recent building and has been extensively modified throughout the centuries. While the building itself is not the oldest, and certainly not the biggest, the bishopric of Bangor is one of the oldest in the UK.

The former Bishop’s Palace has been refurbished as the new home for the museum and gallery, called Storiel. Art and local artefacts are on display here, along with an information hub for Ein Treftadaeth – Our Heritage.
Friars School was founded as a free grammar school in 1557, and the University College of North Wales (later Bangor University) was founded in 1884.

In 1877, the former HMS Clio became a school ship, moored on the Menai Strait at Bangor, and had 260 pupils. Closed after the end of hostilities of World War I, she was sold for scrap and broken up in 1919.

During World War II, parts of the BBC evacuated to Bangor during the worst of the Blitz.

In June 2012 Bangor was the first ever city in the UK to impose a city centre wide night time curfew on under-16s. The six-month trial was brought in by Gwynedd Council and North Wales police but opposed by civil rights groups.

Bangor has been unique outside of England in using the title of ‘city’ by ancient prescriptive right, due to its long-standing cathedral. However, city status was officially conferred on it by the Queen in 1974.

Cardiff claims to have the largest concentration of castles of any city in the world. As well as Cardiff Castle and Castell Coch, there are the remains of two Motte and Bailey castles in Radyr and Rhiwbina (both known as the “Twmpath”, a Welsh word for a small mound), which along with a castle at Whitchurch (known as Treoda and destroyed by housing in the 1960s) formed an arc of fortifications which divided the Norman lordship from the Welsh lordship of Senghenydd. Further up the Cefn Cibwr ridge on the boundary with Caerphilly there is also another ruined castle, known as Castell Morgraig. Archaeological evidence suggests this castle was never finished, and it is debated whether the fortification was of Norman or Welsh origin. The concentration of these castles is indicative of the moveable nature of the border between the Norman lordship of Glamorgan, centred at Cardiff, and its Welsh neighbours to the north.

Garth Pier is the second longest pier in Wales, and the ninth longest in the British Isles, at 1,500 feet (460 m) in length. It was opened in 1893 and was a promenade pier, for the amusement of holiday-makers who could stroll among the pinnacle-roofed kiosks.

In 1914 it was struck by a vessel that had broken free of its moorings. The damaged section was repaired temporarily by the Royal Engineers, but when in 1922, a permanent repair was contemplated, it was found that the damage was more severe than had been thought. The repairs were made at considerable cost and the pier remained open until 1974 when it was nearly condemned as being in poor condition. It was sold for a nominal price to Arfon Borough Council who proposed to demolish it, but the County Council, encouraged by local support, ensured that it survived by obtaining Grade II Listed building status for it.

Bangor has lots of leisure facilities including pool, Play Centre and pier, where you can enjoy a favourite local treat of tea and fresh scones. A good shopping scene too along what’s reputed to be Wales’s longest High Street, boosted by the modern Deiniol and Menai centres.

Visit the iconic Pontio, a venue for theatre productions, film, music, circus, dance and other innovative performing arts. And don’t miss dramatic Penrhyn Castle, the National Trust mansion set in beautiful grounds on the outskirts of town, and nearby GreenWood Forest Park, a popular family attraction. 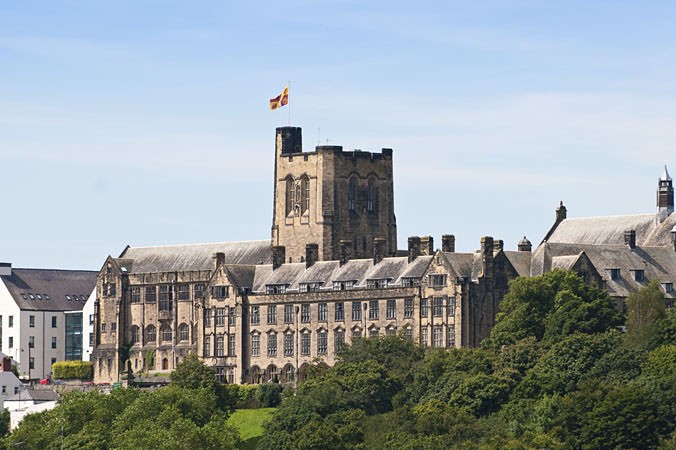 Map of Bangor in Wales